RS will now include setup program to allow you to choose different rendering or audio engines. 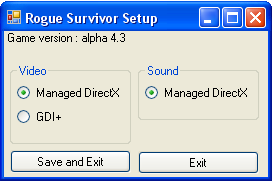 Managed DirectX is the best but less reliable.
GDI+ should work for everyone but is slower, especially on Windows XP as it does all the rendering in software on this OS. At least more people should be able to play the game!
I had the bright idea to abstract rendering into an interface since the beginning of the project so it took me only a few hours to code the GDI+ engine.

Despite sharing the same interface in the game, Managed DirectX and GDI+ renders things slightly differently.
Catch the differences!

There's only one choice for Sound, but I'll add at least one more engine for people who have no sound.

Blog Interview
For hardcore fans I did an interview about the game for a blog: read it there. You might learn stuff. Or not.