Minor stuff that improves the game.

IMPROVISED WEAPONS
In addition to dropping planks breaking wooden objects might allows you to scavange a couple of improvised weapons. They are inefficient and fragile but you'll find plenty of them.

PUSHING CARS
You can. But its very tiring as they are very heavy things. You can't push burning cars. And yes, fire is not handled yet but it will come sooner and later.

STA RULES CHANGE
STA can now go below 0, it has no lower bound.
This makes vomitting more annoying and pushing cars risky, as you will be tired for several turns.

RAPID FIRE
Fire twice in a turn but with horrid accuracy : 50% for the first shot, 30% for the second.
Yep, total is not 100% so potential damage is lower than a standard shot.
Careful not to waste ammunitions with that, use your brain while you still have it.
You'll have to look at tactical factors to make your decision.

COWARD FOLLOWERS
As if being dumb wasn't enough you can now turn your followers into cowards too.
The coward directive means they will always run away from the enemy.
So the directive can now be set to Coward, Cautious or Courageous.

DIE PARROT ADVISOR!
In 4.11 after the first couple of games the advisor is a pain in the ass. He keeps repeating all that you already know. So you likely end up disabling it alltogether....
It will now give you a hint only once, and won't give it again unless you reset it.
You can now also read all the hints at anytime. 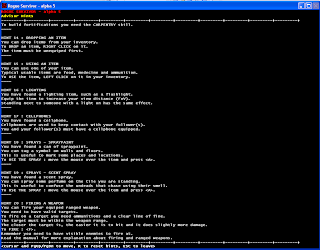 THREAT INDICATOR
(Feature name might change. I'm not happy with it, if you guys have a better name for it...).
Players can have a hard time predicting when that zombie with speed 0.66 will move or not, and is safe to engage in melee or not.
There is now an option that does that for you. Off by default, since it makes the melee subgame much easier. 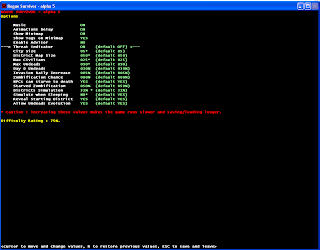 The game will display a colored indicator next to your enemies:
- green is safe : you will move again before the enemy does (unless you loose speed obviously).
- yellow is a dangerous: the enemy can act just after you do. 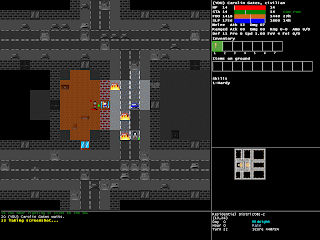 Here I'm next to the ZM and the light is green. It means I can hit him now and evade the next turn.
So I hit him... 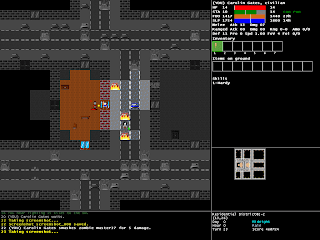 The light is now yellow, he will move after I do. So I evade...

Most player already do that, the indicator just makes it easier (is that what you guys call "kiting"?).
As a nice side effect, I used this feature to improve civilians AI melee combat tactics. They are now much more effective at killing slow targets in melee, hitting and evading properly like you do.

FRAGILE MELEE WEAPONS
Melee weapons can now be tagged as "Fragile". They have x2 more chances to break.

ITEMS VARIANTS
Now that the basic items are working, I'm starting to add more items variations to give the player more choices in gear. Start with the existing items and create variants from them, with slight stats differences, giving other advantages and drawbacks.

4.11 had already the Kolt Revolver (more damage but less ammo than the pistol).
I've already added the Short Shovel (based on the Shovel; no STA penalty, but weaker and fragile) and the Iron Golf Club (based on the Golf Club; more damage and not fragile but STA penalty).
If you have any ideas of item variants, feel free to share!

TOTAL CONVERSION MODDING...
...Is not supported and will not be supported.
TC needs a game engine that is a completly moddable engine.
RS engine is NOT designed that way.
You can change stats and graphics, that's it.
Sorry, but that's the way this game works and was planned. It allows me to work much faster, focusing on gameplay and getting stuff done.

4.11 DOWNLOAD HOSTING
Mediafire did not work yesterday, so I added Rapidshare.

I didn't realize there was an option to allow comments to anonymous guests. DOH!
Everyone can now comment.
Thanks to the person who pointed that to me.
Of course I reserve the right to disable that if I get too much annoying spam (I'm getting mail from Nigeria already) or trolls (which I doubt since roguelike players are nice and clever people... Right? ;) ).

DONE.
Involved bunch of repetitive typing, Ctrl-C Ctr-V and refactoring but its done.
Remember you can only mod stats, not the abilities or types and you can't add new content.
Some stuff are still hardcoded.
RS was designed that way. It gets the game done faster, rather than being a nice project with cute design and features that never gets done (I did that way too often).
I'm sure this will make some people disappointed/angry/furious :D

ITEMS MODDING
Like actors, all items are moddable.
For instance Melee Weapons: 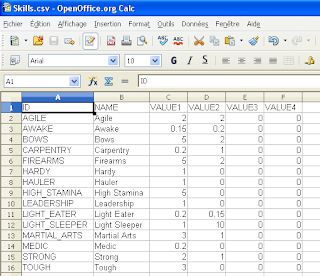 NEXT!
So you will be able to mod actors, items and skills stats.
All the files are in Resources\Data.
There's also a readme.txt that explains some stuff.
I'm done with modding support for this version.
Now onto more interesting and fun things...

SO?
Implemented. I hate coding parsers and stuff like that. But its done.
The game now reads the actor model data from a CSV file, rather than hardcoded values.
You can change most game values of the actors. 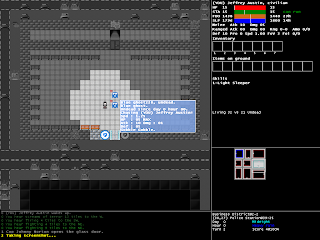 The stat line went from this:

The vanilla GameActors.csv file now looks like this in Open Office: 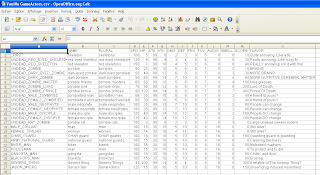 Next Alpha
4.2 if really annoying stuff to fix, otherwise straight to 5.0

Stats Modding
5.0 will allow stats modding.
Some of the game models data (actors and items) will be read from text files, so you guys can toy with them.
Only stats will be moddable, abilities will not (because they are tied to AI and other hard-coded stuff).
Some stuff will still be hard-coded sorry.

Stats Modding : What File Format?
Should be human readable, light-weight, easily editable with a text editor.
CSV fits the bill.
No need for XML, since there is a constant number of fields with simple integer values.
Proprietary format (some fancy .dat or whatever) is a big no-no for me.

Sample data file : Actors models in 4.11
I have written a simple CSV exporter for the game actors in 4.11, and this is how the resulting file looks like in Open Office.
Some stats like Fov and Smell were hidden till now ;)
Remember these are raw stats without the effects of skills! 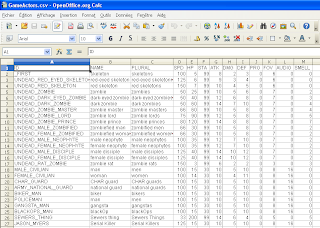 Some stats are not used at all by the game (eg: STA for undeads) because of lacking abilities in the model definition and the values are just for show.

Hey! Wait! What about the poll about spoilers?
The player maintened wiki should be enough?